Corporate Japan will this year face a record-high number of climate-focused shareholder resolutions.

The shareholders include civil society organizations or their representatives, such as Market Forces, 350.org Japan, Friends of the Earth Japan, Kiko Network and Rainforest Action Network.

“Japan is on the front line of a global economy-wide transition driven by the need to adapt to the threats and opportunities of the climate crisis,” said Dr. Sachiko Suzuki, Japan Climate and Energy Researcher at Market Forces. “Change is happening fast and those companies that fail to align their strategy are creating a grave risk to their future. Investors are alive to these threats and demanding action.”

Shareholder action is focused on those companies developing or financing new fossil fuel infrastructure, despite the fact that doing so is out of line with Net Zero by 2050 and the goals of the Paris Climate Agreement.

The lifecycle emissions from 10 proposed LNG to power projects’ operating lifetime with JERA, TEPSCO, Mitsubishi Corporation, and SMBC Group involvement (17.8 GW) is estimated to be 1.2 billion tonnes of CO2-e. This is almost double Japan’s 2030 absolute emission reduction target under its nationally determined contributions (NDCs) towards achieving the goals of the Paris Agreement.

Leading research organizations and the UN have found that between 2020 and 2030, global oil and gas production must decline annually by 4% and 3%, respectively, to be consistent with the Paris Agreement’s 1.5°C warming goal. In its seminal 2021 Net Zero by 2050 scenario, the International Energy Agency (IEA) clearly states the net zero pathway requires no new oil and gas production projects.

While this number of climate-focused shareholder resolutions already surpasses the 2021 total, further resolutions are expected in the coming weeks. This surge mirrors a global trend, as investors sharpen their focus on how companies are responding to the climate crisis.

For example, in 2021, based on their analysis of a record 49 climate resolutions in the US,  investor group Climate Action 100+ declared the 2021 proxy season a “historic success”, with the most notable win being the election of three new climate smart directors on the board of ExxonMobil.

The resolutions came after ‘a year when unprecedented floods, wildfires, and hurricanes across the U.S. led to hundreds of deaths and an estimated $125 billion in damages.’ 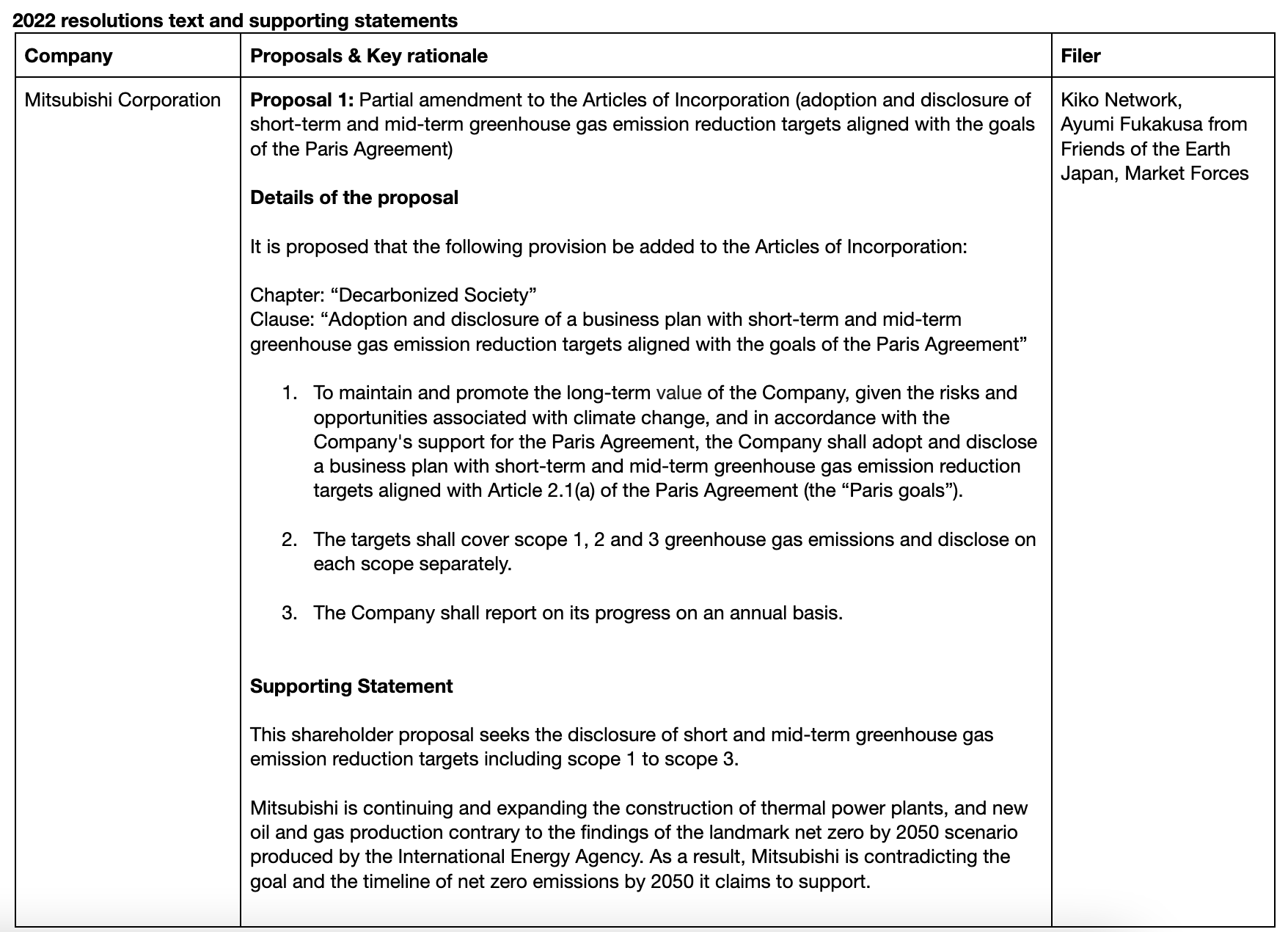 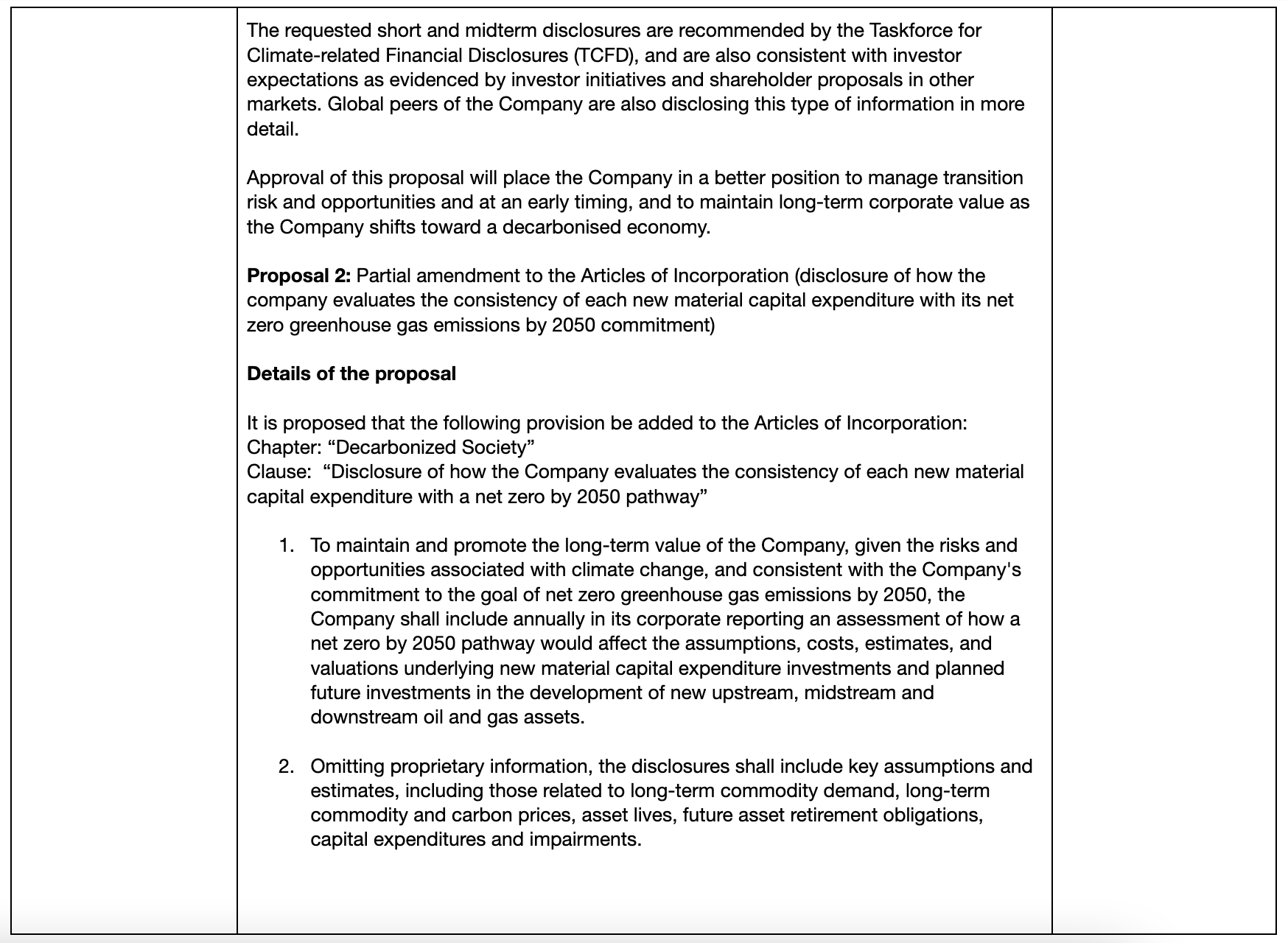 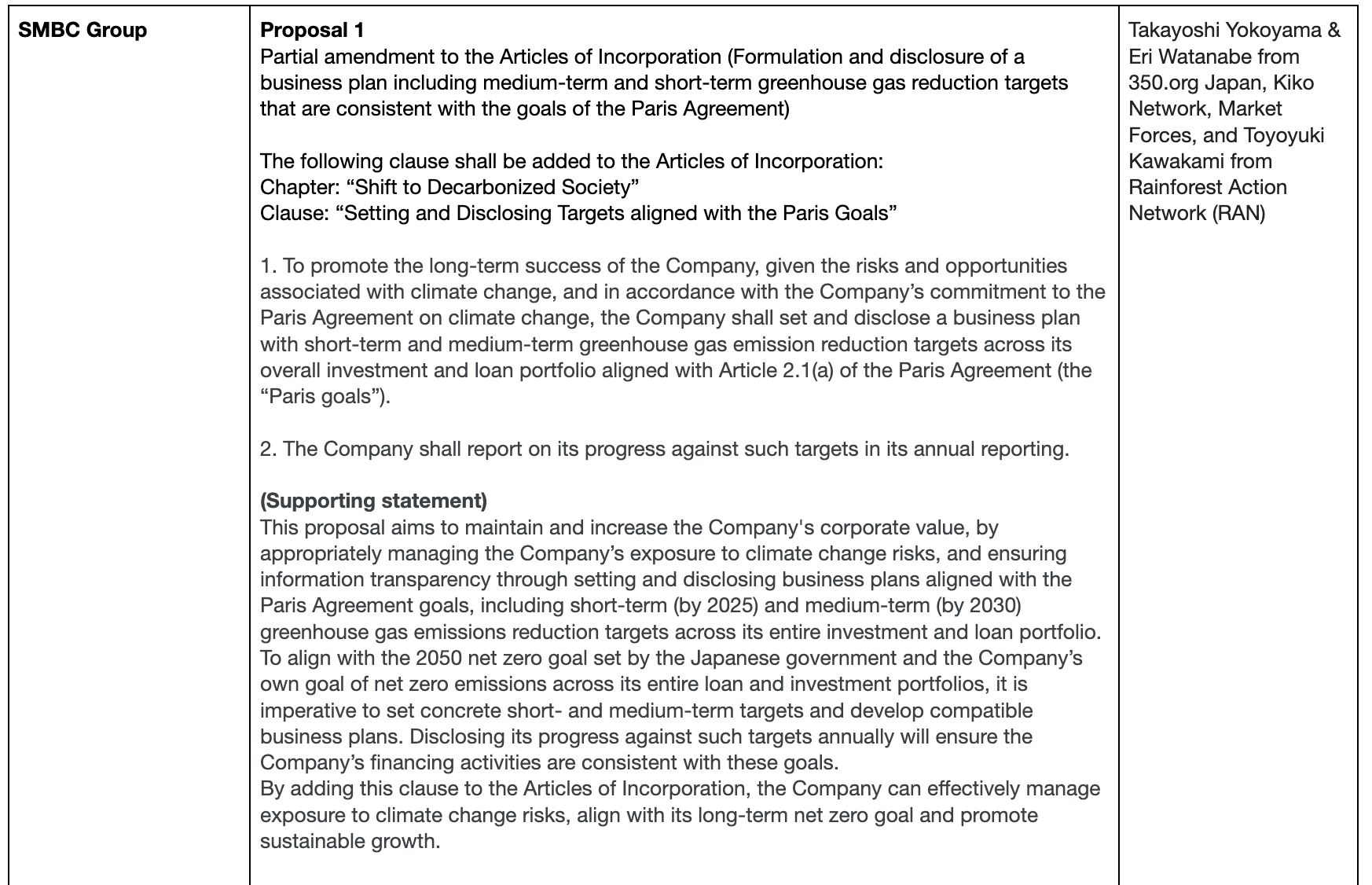 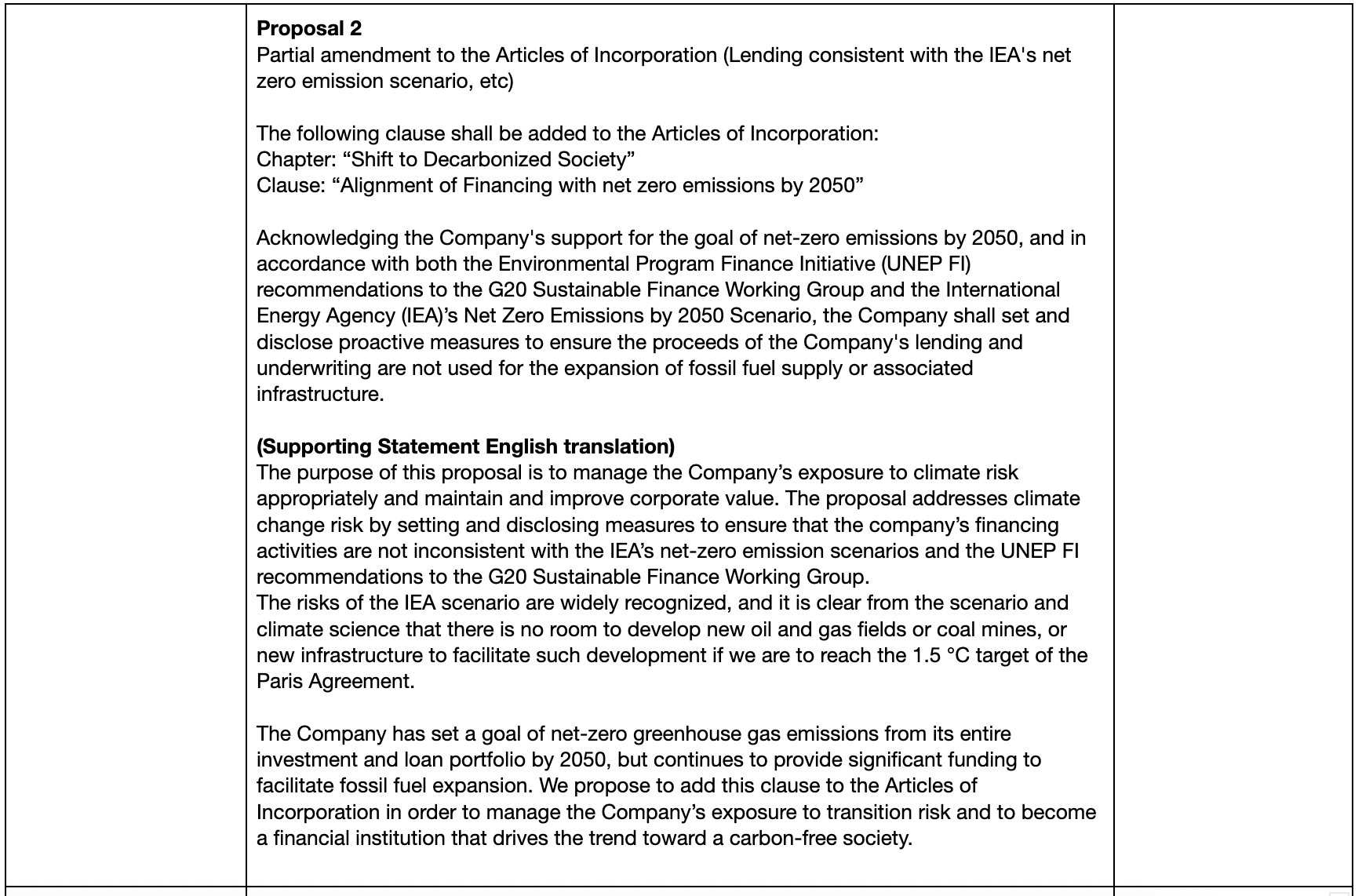 *****
Investor briefings on the shareholder resolutions

Mar 16, 2022 - By Environmental NGOs
Japan must cut ties with Russian fossil fuels and stop financing fossil fuels globally
Sep 21, 2022 - By Environmental NGOs
[Joint Statement] The Japanese Government’s “GX Strategy” is soaked in fossil fuels: Japan should provide real solutions for decarbonization, but not false solutions like hydrogen and ammonia co-firing and LNG
Sep 26, 2022 - By Environmental NGOs
[Press release] Civil Society Groups urge Japan to stop promoting false solutions like hydrogen, ammonia co-firing and LNG
We use cookies to help us understand how you use our site and give you the most relevant experience with Fossil Free Japan, including our content and ads on our social media and other digital platforms. By clicking “Accept All”, you consent to the use of ALL cookies. However, you may visit “Preferences” to enable or disable the specific cookies.