Japanese support for Russian fossil fuels is significant. The Centre for Research on Energy and Clean Air (CREA) released a report finding Japan was the largest coal importer and the third-largest LNG importer in the world in the first 100 days of the invasion.

According to the letters from the Ukrainian coalition, more than 14.5 million Ukrainians have fled their homes, while tens of thousands of civilians have been killed. Enormous damage to infrastructure such as medical facilities and kindergartens have been reported, and it is expected that Ukraine’s GDP will drop 30 to 50%.

The revenues from fossil fuels is the key enabler of Russia’s war crimes, atrocities, and occupation. According to CREA’s report, Russia earned EUR 93 billion (JPY13 trillion1) in revenue from fossil fuel exports which were record-high in the first 100 days of the war (February 24 to June 3). This report revealed the far too slow responses from governments and corporations, as well as contradictions in their responses; appealing for support for Ukrainians while purchasing fossil fuels and providing financial support to Russia.

Japan was the largest Russian coal importer and the third-largest LNG importer in the world in the first 100 days of the invasion, purchasing EUR 1.9 billion (JPY 250 billion) worth of fossil fuels from Russia.

The Japanese government announced the phase-out of Russian coal in April and then crude oil in May. According to CREA, while Russian crude oil imports were suspended after mid-April, coal imports continued till May.  Moreover, LNG is still being imported on a large scale.

The imports of Russian fossil fuels by the 6 companies are estimated as follows: 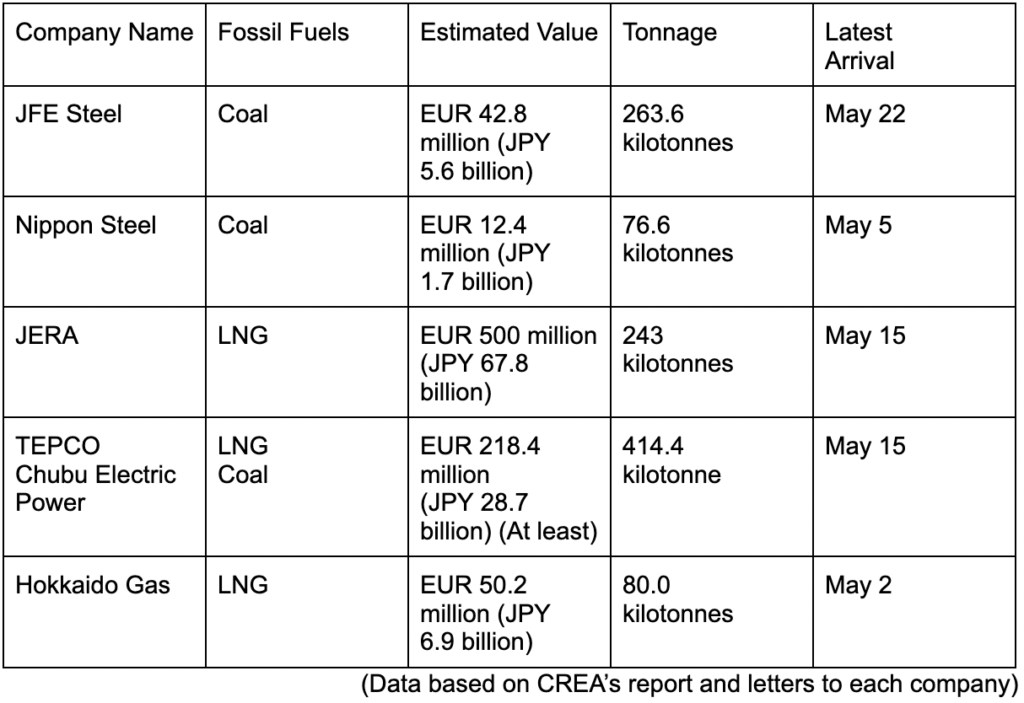 Oct 19, 2020 - By Environmental NGOs
[NGO Press Release] Indonesian and Japanese NGOs call on both governments to stop the Indramayu Coal-fired Power Plant Expansion Project, West Java, Indonesia
Sep 29, 2020 - By Kiko Network
Launch of Japan Beyond Coal campaign to phase out coal power
Sep 24, 2020 - By 350.org
Evaluating the TCFD Recommendations Disclosures by the Three Japanese Megabanks
We use cookies to help us understand how you use our site and give you the most relevant experience with Fossil Free Japan, including our content and ads on our social media and other digital platforms. By clicking “Accept All”, you consent to the use of ALL cookies. However, you may visit “Preferences” to enable or disable the specific cookies.