The Japan-backed liquefied natural gas (LNG) buildout in Asia
threatens to derail the global goals of the Paris Agreement.

A new study looking across Bangladesh, Thailand and Vietnam, the sites of the three largest gas power project expansions (outside China), identifies the Japanese companies most actively pursuing a liquefied natural gas (LNG) buildout in Asia, putting the climate goals of the Paris Agreement in peril.

This buildout is being proposed despite the International Energy Agency (IEA)’s landmark scenario stating we need to stop adding fossil fuel supply if we are to achieve the goal of net-zero emissions globally by 2050, warning that much of the proposed and even existing LNG infrastructure risks becoming stranded.

Japanese companies and the buildout of LNG power in Bangladesh, Thailand and Vietnam

Market Forces reviewed the LNG projects slated for Bangladesh, Thailand, and Vietnam, the countries with the three largest gas power project buildouts in Asia after China (according to the Global Energy Monitor’s (GEM) Global Gas Plant Tracker January 2022, based on capacity under construction and proposed).

Of the Japanese companies, JERA (joint venture of TEPCO and Chubu Electric), Mitsubishi Corporation and SMBC Group are among the most heavily involved: 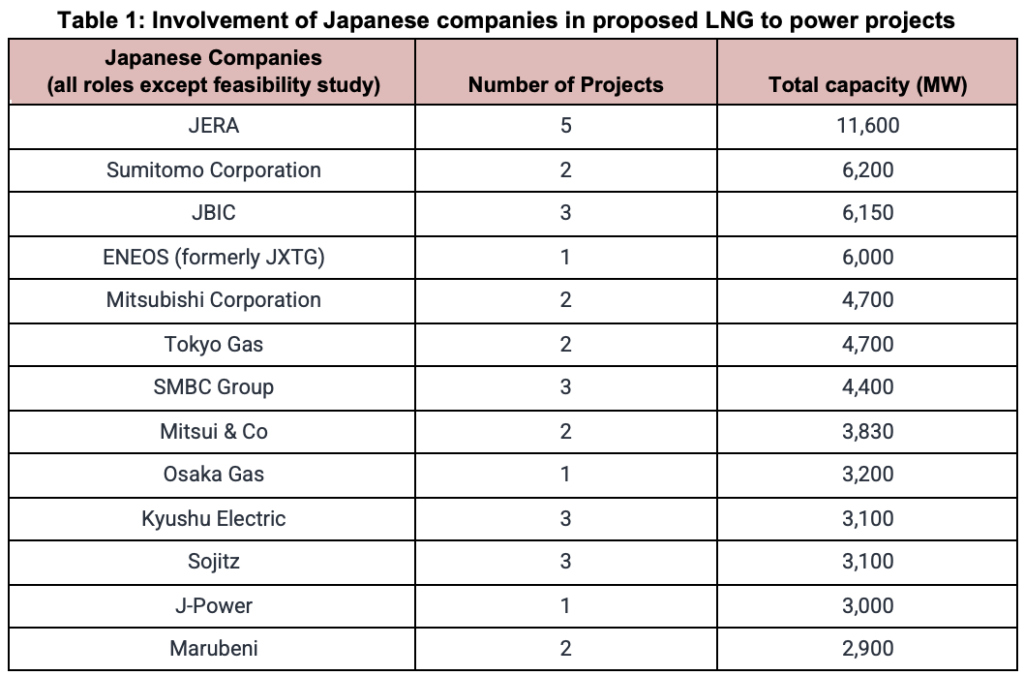 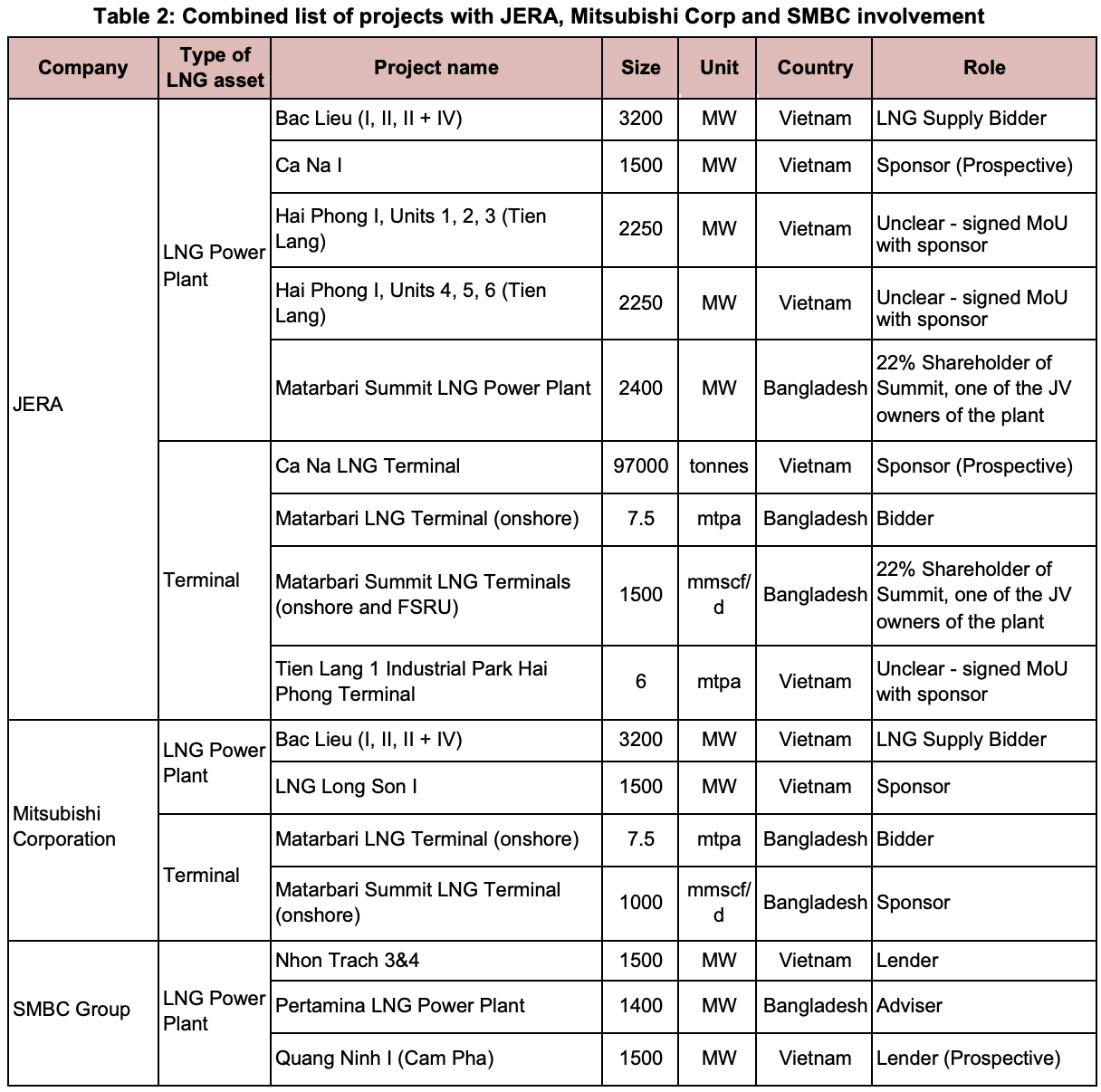 This buildout spells disaster for communities and climate

The lifecycle emissions from 16 proposed LNG power projects’ operating lifetime with all Japanese companies’ involvement (33.8 GW) is estimated to be 2.2 billion tonnes of CO2-e. This figure does not include projects where Japanese companies are involved at the feasibility study stage.

The lifecycle emissions from 10 proposed LNG to power projects’ operating lifetime with JERA, TEPSCO (subsidiary of TEPCO), Mitsubishi Corporation, and SMBC Group involvement (18.1 GW) is estimated to be 1.2 billion tonnes of CO2-e. This is almost double Japan’s 2030 absolute emission reduction target under its nationally determined contributions (NDCs) towards achieving the goals of the Paris Agreement [1].

JERA, Mitsubishi Corporation, and SMBC Group need to live up to their commitments to net zero emissions by 2050, withdraw from these projects and ensure the communities in these countries get the same opportunity as wealthy countries to develop with clean and cheap renewable energy.

This analysis examined the LNG projects (LNG to power, terminals and Floating Storage Regasification Units (FSRUs)) proposed to be built in Bangladesh, Thailand and Vietnam as of December 2021.

The projects list compiled by Market Forces is not an exhaustive list of all domestic gas and imported LNG projects. Projects powered by domestic gas sources are excluded. Market Forces has made every effort to ensure the analysis and information provided in the analysis are sound, but cannot guarantee the accuracy or correctness of any of the data collected from external sources.

Mar 31, 2021 - By Insure our Future
Actions Around the World Put Tokio Marine on Notice
Oct 28, 2020 - By Environmental NGOs
[Joint Statement] Japanese NGOs praise collective engagement by institutional investors calling for investees to withdraw from Vung Ang 2 coal-fired power plant in Vietnam
Oct 20, 2020 - By Environmental NGOs
[Joint Press Statement] Inadequately aligned with Paris Agreement, Mitsubishi UFJ Financial Group lags far behind its international peers
We use cookies to help us understand how you use our site and give you the most relevant experience with Fossil Free Japan, including our content and ads on our social media and other digital platforms. By clicking “Accept All”, you consent to the use of ALL cookies. However, you may visit “Preferences” to enable or disable the specific cookies.