Further to the detailed investor briefing dated April 20, 2022, 350.org Japan, Market Forces, Rainforest Action Network and Kiko Network (‘the co-filers’) present this additional brief regarding updated announcements from SMBC Group and the board opinion on the shareholder proposals filed.

SMBC Group’s policy update and board opinion do not address the core substance of the shareholder proposals. They do not disclose short and medium term targets for emissions reduction nor do they disclose meaningful measures taken to ensure that the bank is not financing the expansion of new fossil fuel supply or its associated infrastructure, in line with the IEA’s Net Zero by 2050 (NZE2050) scenario.

Investors are therefore urged to vote for these proposals at SMBC Group’s Annual General Meeting on June 29, 2022.

1. Updates to emissions targets are inadequate, incomplete and delayed

SMBC Group itself admits an absolute emissions target is necessary to meet the Paris goals, yet it has only announced an intensity target (138〜195gCO2e/kWh reduction by 2030) for financed emissions in the power sector. The company can meet this intensity target while increasing its financing for the fossil fuel power sector and increasing absolute financed emissions, which is inconsistent with the net zero pathway. In addition, the target only applies to lending and not to investment and underwriting. Any target must cover the overall financing and investment portfolio in order to align with the company’s commitment to net-zero emissions in its “overall loan and investment portfolio by 2050”.

The company has also committed to announcing 2030 emissions targets in the energy sector (coal, oil and gas) in August 2022. However, the scope of these targets appears limited to “upstream businesses”. Associated fossil fuel infrastructure, which the IEA also highlights in its NZE2050 scenario, such as LNG terminals, are out of the scope of SMBC Group’s August target setting plans.

2. Updates do not detail meaningful measures to ensure the bank is not financing the expansion of new fossil fuel supply

The IEA NZE2050 scenario is clear there is no need to develop new fossil fuel supply projects, stating “(n)o new coal mines or mine extensions are required.” SMBC Group’s May 2022 update holds that the company will not provide support for new or expansion of existing thermal coal mining projects. However, it does not address corporate finance to companies pursuing new and expanded coal mines, which represents the vast majority of funding for coal mines. SMBC Group’s recent lending includes:

SMBC Group’s update does not restrict further loans to these companies despite their plans to expand coal mining. A key test of SMBC Group’s sustainability commitment will be whether it renews its loan commitment to Adaro by participating in a refinancing of one of its subsidiaries in July 2022.

The IEA NZE2050 also states that “(b)eyond projects already committed as of 2021, there are no new oil and gas fields approved for development in our Pathway.” SMBC Group’s update does not address this issue, although its exposure is significant. The bank is ranked 4th in the world for finance to the LNG sector and 8th for finance to oil and gas in the Arctic region, exceeding other Japanese banks. By comparison, Dutch bank ING has already committed to stop financing new upstream conventional oil and gas projects, while several insurers have introduced policies to exclude underwriting to new upstream oil and gas projects.

3. SMBC Group still falling behind peers, despite the updates

SMBC Group is falling behind its domestic competitors with policies which more clearly manage climate risk. The chart below reflects the policy updates made in April/May 2022. 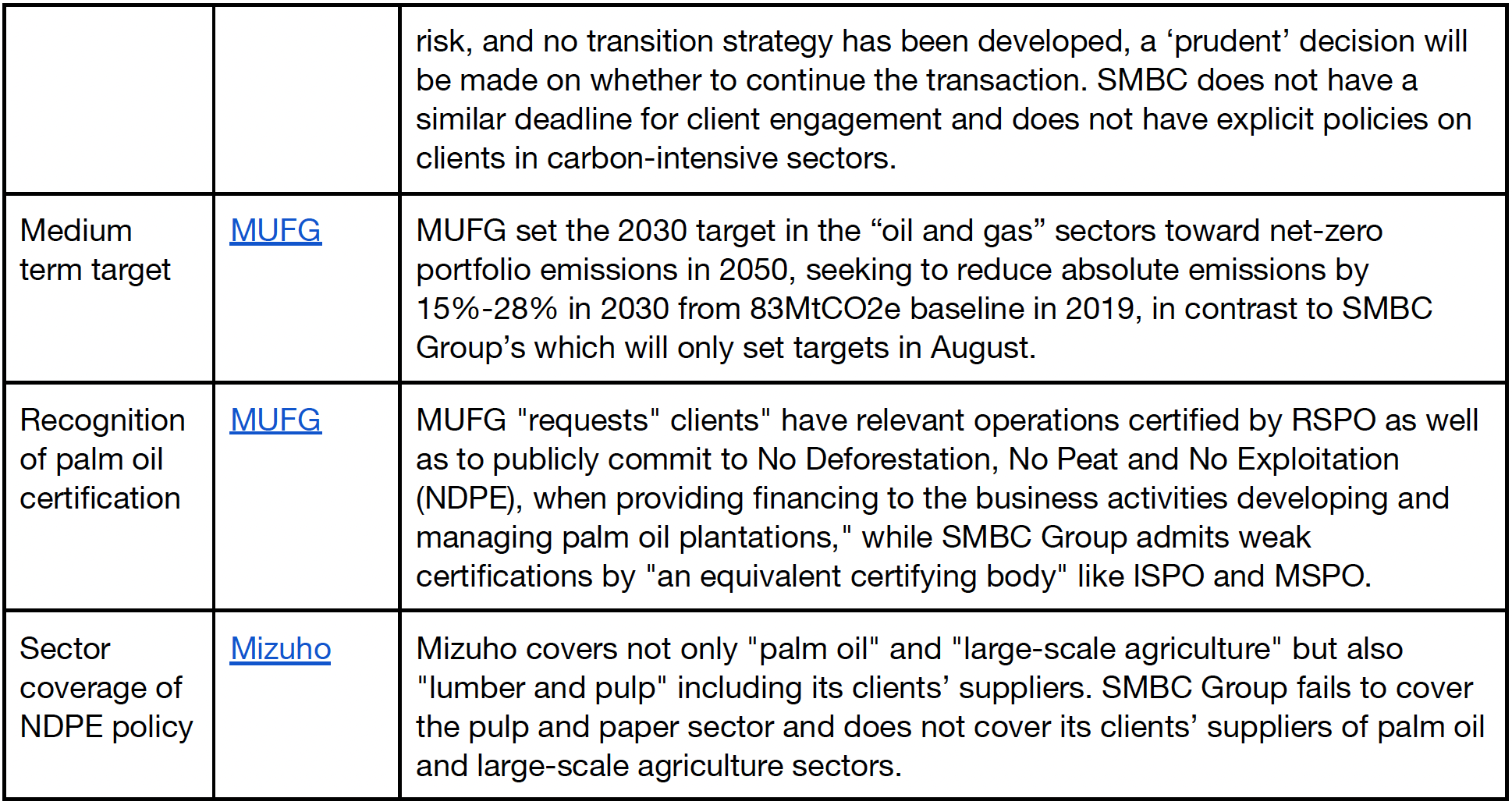 4. The main objection to the proposals appears to be the form, rather than content

SMBC Group published an opinion of the Board of Directors regarding the shareholder proposals, which centers on whether amendments to the articles of incorporation are appropriate for these forms of shareholder proposals. However the opinion ignores the fact that such amendments are the sole legal pathway climate-related resolutions can take to avoid being rejected under the Companies Act, and the proposals in no way limit the directors’ ability to exercise business judgment enshrined in Japanese corporate law. The legal effect of these shareholder proposals is the same as the “special resolutions” on climate change filed and passed at UK companies including Barclays, BP, Royal Dutch Shell, Rio Tinto and Anglo American, which take binding effect as part of the companies’ constitutions.

Moreover, if the company is “earnestly” working on climate action, as it claims, there is no reason that it should refuse to add the proposals to their articles of incorporation.

For the reasons above, we urge investors to vote for these proposals at SMBC Group’s Annual General Meeting on June 29 for the company to maintain and increase its long-term corporate value.

Mar 29, 2021 - By Environmental NGOs
[PRESS RELEASE] Japan’s Largest Bank Targeted by Climate Resolution
Oct 19, 2020 - By Environmental NGOs
[NGO Press Release] Indonesian and Japanese NGOs call on both governments to stop the Indramayu Coal-fired Power Plant Expansion Project, West Java, Indonesia
Sep 29, 2020 - By Kiko Network
Launch of Japan Beyond Coal campaign to phase out coal power
We use cookies to help us understand how you use our site and give you the most relevant experience with Fossil Free Japan, including our content and ads on our social media and other digital platforms. By clicking “Accept All”, you consent to the use of ALL cookies. However, you may visit “Preferences” to enable or disable the specific cookies.